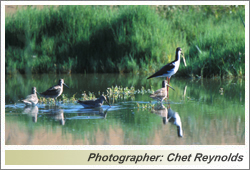 Nestled between a busy freeway, railroad tracks, an oil refinery, a sewage treatment plant, a chemical plant, and a small community, McNabney Marsh has been one of the most productive wetland systems in the Bay Area, providing food and shelter for a wide variety of fish, mammals, birds and invertebrates. It is part of a much larger Peyton Slough Wetlands complex, a series of wetlands which includes Mt. View Sanitary District’s Moorhen Marsh plus other wetlands which drain a watershed covering more than 3,900 acres.

Named to honor long-time MDAS conservation advocate Al McNabney who was instrumental in securing its preservation, the marsh covers 138 acres. It was originally created in the 1880’s when a major railway was constructed through the area. Plans were underway to develop the site for industrial uses when late in the evening of April 23, 1988, a tank at the Shell Manufacturing Complex filled with hundreds of thousands of gallons of San Joaquin crude oil began to leak. A hose designed to drain water from the roof of the tank failed and began to siphon oil into the containment area surrounding the tank. Unfortunately, a storm water release valve had been left open, and the oil continued to drain into a nearby creek, moving under the freeway and into what is now called McNabney Marsh.

Oil filled the 100-acre marsh to a depth of more than four inches before flowing under the railroad tracks and finally out into the Carquinez Strait and, on the next tide, downstream into San Pablo Bay. Due to darkness, no one noticed the spill or its origin. Workers at the Shell wharf were the first to report oil on the water, but they did not at first recognize that it had come from a tank on Shell’s property. Before the source of the spill could be located and stopped, an estimated 400,000 gallons of heavy crude oil had leaked into the environment. 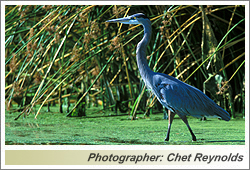 In April 1990, Shell offered about $20 million to settle all of the claims for recovery of damages in a single consolidated state and federal action. The settlement included almost $11 million to restore damage to natural resources, under the direction of a Trustee Committee established by the court. Over the next eleven years, the Trustee Committee funded and contributed to a number of projects to restore the damages of the spill and to protect and enhance fish and wildlife resources and recreation in the areas of the spill. Because McNabney Marsh was the most heavily impacted, the Trustees gave special consideration to restoring and enhancing it. 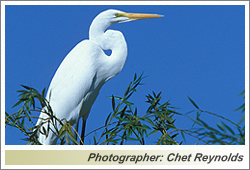 In 1992, the Trustees funded purchase of the marsh and uplands for $3,000,000. The upland areas complement the habitat values of the marsh and allow for establishment of transition habitat and a buffer zone, and also provide space to enable public viewing and interpretation of the marsh. East Bay Regional Park District completed the acquisition, and manages it in partnership with the Mt. View Sanitary District.

The regulatory agencies’ original goal for the restoration of McNabney was to create a brackish marsh, returning salt water from the Bay. Such flows had been absent for many years. About two million gallons per day of treated effluent from the Mt. View Sanitary District is the primary water source. Today re-established tidal action is controlled via a 5-gate structure on Peyton Slough which was first opened in June 2009. When the tide gates are open, water flows in and out of McNabney; when the tide gates are closed, water only flows out.

Managing a healthy marsh environment has proved quite challenging. Due to subsidence, the marsh is actually lower in elevation than the mouth of its outfall at Suisun Bay. Insufficient drainage when the tide gates are open causes stagnation. This effect aggravates water quality issues and can cause problems with low dissolved oxygen, algae growth and odors. Additionally the open tide gates flood most of the habitat for ground-nesting birds which waterfowl and shorebird species have relied on for decades, significantly reducing the number of successful fledglings.

In January 2017, Mt. View Sanitary District began preparations for a two-year maintenance and restoration project in Moorhen Marsh. The project was planned to create improved habitat for native wildlife species, including the Western Pond Turtle. Project goals included repairing levees, excavating ponds, creating additional riparian and wetland habitat and constructing new visitor amenities. However, the existing ponds had to be de-watered before work could begin, so Mt. View requested that the tide gates be closed in January, allowing water to flow out of the watershed.

At the same time, from January through April 2017, the area received nearly double the normal amount of rainfall. The resulting run-off created very high water levels in McNabney. Mt. View’s annual nesting survey reported that five nests had been flooded in April; as a result, on May 1 the local warden for the California Department of Fish & Wildlife issued an order to close the tide gates for the remainder of the nesting season to prevent additional nest losses.

When the tide gates were reopened at the end of the 2017 nesting season, a number of issues emerged. The absence of tidal action for seven months had caused increased siltation, a major impediment to proper drainage. Managers hoped that renewed tidal action would scour the channels and result in increased flushing. In the meantime, however, water quality samples in the northerly wetlands showed elevated levels of sulfides, suspected to be caused by decaying vegetation from tule die-off. Duckweed was also choking parts of Peyton Slough, which could result in low oxygen levels in the water—a problem for fish. And, speaking of fish, the species south of the tide gates are now mostly non-native. However, Mt. View biologists noticed many dead common carp in McNabney Marsh once water levels receded, possibly reducing the population of this harmful invasive species.

The Peyton Slough Wetland Advisory Committee is a voluntary group, composed of federal, state and local public agencies, as well as various landowners and other stakeholders, which meets quarterly to discuss these complex management challenges. Representatives of MDAS also attend these meetings and have repeatedly expressed concern about the impacts of the water management regime on bird populations. The committee is currently working to come to consensus on the optimal plan going forward which will benefit wildlife and improve the functioning of McNabney Marsh.