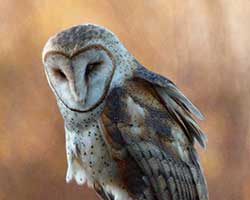 Anticoagulant rat poisons currently on the market (such as d-CON) contain highly toxic chemicals which interfere with the blood’s ability to clot, resulting in uncontrollable internal bleeding and death. In addition to rodents, other animals that feed on poisoned rodents are also poisoned! 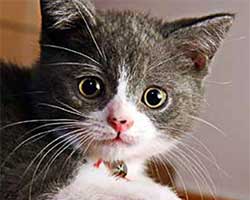 The domestic cat is a non-native and invasive species. An estimated 600 million cats live worldwide, with approximately 160 million in the US. Cats are highly efficient, instinctive predators; even well-fed, they continue to hunt and kill wildlife. Worldwide they are responsible for the extinction of numerous mammals, reptiles and at least 33 bird species. 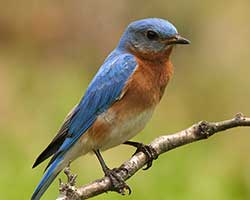 Bluebirds! They carry the blue of the sky on their backs but have lost much of their natural nesting habitat. The Bluebirds and many other cavity nesting birds need our help by restoring spaces for their nesting and conservation. With such a goal in mind, the California Bluebird Recovery Program (CBRP) has undertaken to increase the help being given to the cavity nesting birds. 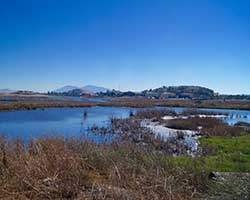 Many people drive by McNabney Marsh (formerly known as Shell Marsh) every day without recognizing its importance as wildlife habitat. Though nestled between a busy Interstate freeway, a railroad, an oil refinery, a sewage treatment plant, a chemical plant, and a small community, researchers have concluded that it is one of the most productive wetland systems in the Bay Area, providing food and shelter for a wide variety of fish, mammals, birds and invertebrates. Thanks to the tireless efforts of a number of public agencies and private citizens, McNabney Marsh is now a thriving success story. However, in 1988, it very nearly ceased to exist.