Keeping Up With the Kestrels

The American Kestrel is North America’s smallest and most colorful falcon. Unfortunately, researchers believe the kestrel’s population status is changing from “common” to “of concern”. The Peregrine Fund’s new American Kestrel Partnership is a research and conservation initiative supported by Audubon chapters, researchers, families, and anyone else interested in kestrels. Mt. Diablo Audubon Society has supported the Kestrel Partnership by erecting and monitoring nest boxes. Learn how you can get involved at: http://kestrel.peregrinefund.org. 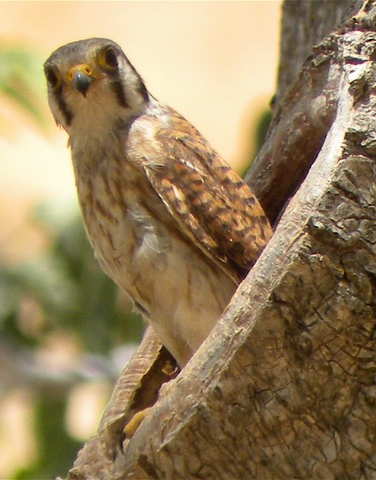 In response to long-term population declines of American Kestrels in North America, members of the Peregrine Team of Pine Canyon (volunteer docents from area conservation groups including MDAS) have expanded their efforts to help another falcon, the American Kestrel. By building and establishing nest boxes in the Mt. Diablo region, doing annual monitoring and data collection for nationwide analysis, and using public outreach and education about the effects of rodenticides on area wildlife, we hope to help local populations recover and increase.

To date, five kestrel boxes have been installed in Walnut Creek: one in Rudgear Park, two in Arbolado Park, and two in the Pine Creek Detention Basin. Plans are firming up to place more boxes on John Muir Land Trust and Save Mt. Diablo lands as well as other area locations, once permission is granted.

Supervisors at the sites where boxes have been placed have given their assurance that no rodenticides are used. However, a remaining problem might be the use of poisons by park neighbors, so a second mission is to distribute informational pamphlets to neighbors. Additionally, each kestrel box has a laminated sheet that explains the ins and outs of kestrels and provides an email for anyone who has questions.

Historically, American Kestrel numbers are presumed to have declined due to DDT, pesticides, rodenticides and heavy metals usage; the loss of nesting cavities due to urbanization and competition with European Starlings; climate change; and predation by Cooper’s Hawks and other birds of prey. However, researchers lack sufficient data to understand why these long-term, widespread population declines are occurring, so the citizen science community is vital for nest box programs, providing important data for research. For general information:

The 23rd Annual East-County count will be held Wednesday, December 14. Again, you can participate by being part of a group in the field, or by doing a count at your property if it is within the East-County Count Circle. If you’d like to participate, please send an email to . The countdown event for this one is again virtual, at 7 PM […]

The 68th Annual Central Contra Costa Christmas Bird Count is scheduled for Saturday, December 17, and participants are needed! You can participate by being part of a group in the field, or by doing a count at your property if it is within the Central-County Count Circle. We have many routes to cover with varied habitats and varying degrees of walking involved, so there […]